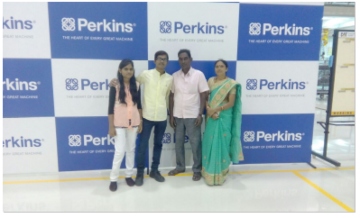 Prashant Kurutge’s moth er Mahadevi, used to be a farm labor while his father Ashok, an electrician, would do sporadic electric fitting and repairing jobs in the village. With a meager, uncertain monthly income fluctuating between Rs.3000 and 5000, the family could hardly afford Prashant’s higher education.
But thanks to Drishti HRC’s Sponsorship Program, which supported Prashant’s Engineering graduation by paying his college and hostel fees to the tune of Rs.2,82,141/-, he could complete his B.E.
Moreover, in his college campus interview, he got selected by Aurangabad based Perkins India Pvt Ltd, a gen-set manufacturing company. He is now earning Rs.30000/- per month. Not only this, he has rented a flat in Aurangabad and taken his parents and a younger sister to live with him there. His father, too, is working now as an electrician with a contractor.
Prashant has already started repayment of EMI Rs.2000/-. Expressing his gratitude to Drishti for its support, Prashant says, ““Drishti HRC’s timely help made by Engineering possible. Thanks to SSM and Drishti, especially Smita and Jyoti Madam, I could not only get a good position in a multinational company but also ask my mother to stop working as a farm labor. I will keep working hard to move ahead in my career, so that, I could be financially strong enough to support other promising, needy students in the future.”